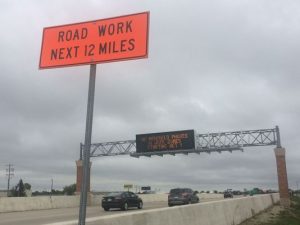 BY KEVIN SAWYER – Recently, the state of Wisconsin enacted laws that now makes it illegal for people to be talking or texting while driving through a road work area. While you can’t be talking while holding a cell phone, you can talk, but not text, if you have the phone in hands free mode.

Wisconsin State Police Lt. Ryan Chaffee said that, “We want to eliminate as many distractions as possible, especially in the work zones. When we have restricted spaces and a lot of things going on in a limited amount of space, you want to have all of your attention, as much as possible, on the road in front of you.”

Wisconsin, like many other states, is trying to make work zones, as well as driving in general, much safer on the roads. Distracted driving, especially due to cell phone use, is one of the leading causes of accidents and fatalities in the country. According to Wisconsin state statistics, in the last five years there have been 9,664 crashes in the state at road work areas. Of these, there were 3,592 injuries and 47 deaths.

While Wisconsin has banned texting or emailing while driving for the past six years, Lt. Chaffee still says that it is tough to really go after the abusers and the ones causing the accidents. Chaffee says that police officers need a valid reason for pulling over a driver for distracted driving but the slower speeds through a road work area will make it easier to spot the offenders and pull them over.

Violations will be punished by a $40 fine for the first offense with $100 fine for each violation thereafter as well as the driver losing points off their license which will affect their standing as well as their insurance rates.

Chaffee concluded that, “It’s common sense. People know this inherently that they shouldn’t be focusing on other things other than driving, especially in the work zones.”