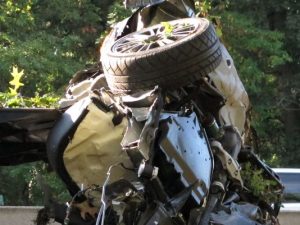 BY KEVIN SAWYER – Federal and state authorities have become quite alarmed of late at the rise in traffic and driving fatalities that have involved drivers using both illegal and prescription drugs. As five more states are poised to hold public votes on whether to legalize marijuana, the rise in drug related driving deaths has doubled in just the last ten years.

The National Highway Traffic Safety Administration has become seriously alarmed at the increased rates of traffic and driving fatalities in general but they are most concerned with the recent figures on drugged drivers. The agency is most concerned that people simply don’t really understand the hazards of driving while under the influence of marijuana. It is legal in five states as another five are set to join the exclusive club. 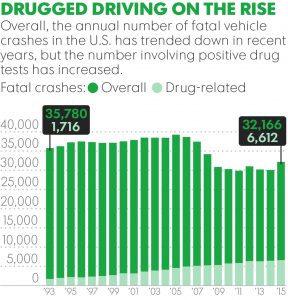 Last year, according to the agency, 21% of all traffic fatalities were related to at least one of the drivers being on drugs. Back in 2005, however, that figure was just 12%. This rise has continued steadily for the last 14 of 15 years. While drugged driving isn’t as prominent as drunk driving, officials remain worried. Drunk driving accounts for 30% of all vehicle related deaths.

Research from certain driving analyst organizations are, indeed, showing a sharp rise in drug related fatalities in those states that have legalized pot. Many universities, as well as national organizations like Mothers Against Drink Driving, have recently been stepping up their efforts to make people more aware of driving under the influence of drugs.