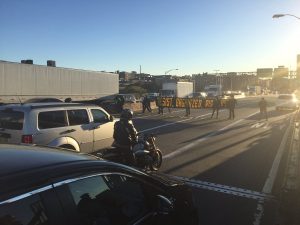 BY KEVIN SAWYER – Protester gathered this morning on the George Washington Bridge in New York City and caused morning rush hour traffic to grind to a complete halt. Dozens of protesters chained themselves across the width of the bridge and concerns were raised about internal security of such structures in the big cities.

Police managed to clear the bridge within 15 minutes of the protesters having assembled their protest. The protesters were protesting immigrant rights. They seemed to believe that immigrants actually have rights here in the United States. Despite clearing the bridge in 15 minutes, traffic delays coming into the city were as long as a half an hour. 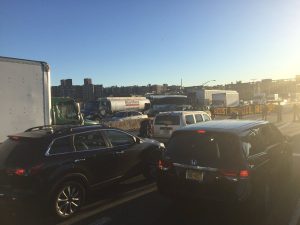 Drivers were furious at the protesters and were hurling verbal abuse at them even as the police arrived. There was no tolerance for a protest on the bridge. The protesters were expecting the government to allow illegal immigrants to be able to vote in the upcoming presidential election. 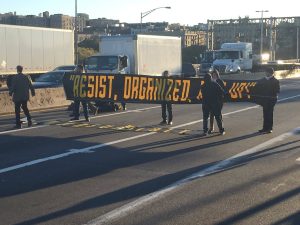 Police arrested ten of the protesters and heard about it from stalled drivers as the police handcuffed them and just had them lying there in the middle of the road rather than moving them away so traffic could proceed. The police seemed more worried about a potential terrorist attack than anything else. They stated that if these immigrants could access the bridge so easily, what would prevent a terrorist attack from happening on the bridge or in the surrounding neighborhoods?

The city of New York had no comments regarding the protest.