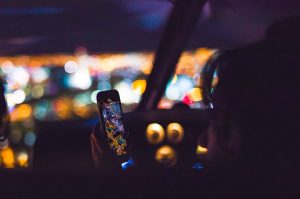 BY KEVIN SAWYER – Recent research has discovered what many have known for quite sometime; that cell phones are playing a greater and greater role as the underlying cause for a great majority of vehicle crashes and accidents. The study, done by Virginia Tech, placed cameras inside of vehicles and found that drivers were distracted by their phones in nearly 80% of the crashes that were studied.

In addition to the significant role played by cell phones, the researchers also discovered that accidents happened much more frequently when drivers were overcome and agitated with such emotions as anger, sadness or anxiety. It still remains difficult for driving safety experts and researchers to discover the true factors of a crash because it is difficult to assess what drivers were seeing and doing right before the accident or crash.

Tom Dingus, the director of the Virginia Tech Transportation Institute said that, “We now have a very clear picture that distraction continues to be a great detriment to driver safety despite growing awareness that engaging in a distracting activity is risky.”

This Virginia Tech study, however, is a first as they were actually able to study the distractions leading up to the crashes or accidents. The study was carried out over a three year span and looked at on board video from over 3,500 drivers in the United States with the ages ranging from 16 to 95. All of the drivers volunteered for the study and allowed cameras to be placed in their vehicles as well as equipment that could detect both location and speed.

The researchers studied 905 crashes that caused physical or property damage or both and found that driver distraction was the cause in nearly 80% of the crashes. The greatest of the distractions included taking the eyes from the road to read a text or talk on the phone, using a touch screen, changing channels on the radio or reaching for something in the vehicle.

What the study further showed was that using a cell phone while driving increased the likelihood of a crash or an accident by four times that of driving without using a phone.